Some time ago we posted a text on our blog about the generation of baby boomers, (you can find it here) Baby boomer – a loyal customer, a demanding traveller – Qtravel.ai Blog . We analysed the characteristics of this generation, what shopping habits they have, how they like to travel, and how they find themselves in the world of the latest technologies. In this article, we want to take a closer look at another generation – Generation X.

The representatives of Generation X were born between 1965 and 1976.. In Poland, the time of their growing up was the time of communist Poland, martial law, the rise of Solidarity and the fall of communism. The world was grappling with the Cold War, and the Berlin Wall was eventually torn down. This was a period of economic crisis, but also of many changes that inspired development. Walkmen were popularized, the first cell phones and personal computers appeared, but they were not yet available to the average citizen. The cinemas were showing Top Gun, ET, Grease, and Star Wars.. Music witnessed the advent of the Disco era with the Bee Gees paving the way.

The very term ‘X’ refers to some unknown quantity – it can be interpreted as a sort of confusion that this generation feels in the chaos of hard times, ongoing changes, or simply the difficulty of categorizing the prevalent diversity. This diversity is mainly due to the fact that in their youth, the world was not yet as well connected through mobile networks and the Internet, and there was much less flow of information and trends.[1]

In everyday life, Xs are self-reliant and independent. They come to many conclusions and decisions by trial and error, drawing on their own experiences. The times they grew up in taught them to appreciate what they have, but also influenced them to question many issues, distrust governments or employers. It is a generation that is often in debt because they take out mortgages and very often live beyond their means. They acquired their first computers in their adulthood, but they are not afraid of innovations, they easily absorb new trends and technologies and are able to adapt to new conditions and opportunities.[1]

How do the Xs do their shopping?

Xs are loyal, but also demanding customers, just like the slightly older baby boomers. They will carefully check the product and the reviews about it before they make a purchase. Trust in the brand and the supplier is very important in the decision-making process – they buy both in brick and mortar stores and online (they choose the latter increasingly more often). They highly value the quality of a product or service. In their choice they are guided by their own experience, the tradition associated with the brand, and its image. Interestingly, they are not blind to the opinions of younger generations either. They are more easily persuaded when a product is advertised by an expert in a given field rather than a social media influencer.[2] This generation is eager to learn, it is open to new technologies, and this in turn is a good start to encourage these consumers to buy online, especially since according to research, compared to baby boomers, Generation X already declares much less of a need to personally see, touch, and check the product before making a transaction.[3] They like to use search engines, review sites and even Facebook to verify product and service reviews. It is, therefore, worth spending a moment on how this generation finds its way in the world of new technologies.

How do the Xs treat new technologies?

For Generation X, the Internet is primarily an information network. There, Xs check current events, use email, do the shopping, and seek the opinions of experts and younger generations. They are alert and will not be easily persuaded to buy something they do not need. They are active in social media. According to Data and Research on Digital for Business Professionals | Insider Intelligence the social networking site they use the most frequently is Facebook, with Instagram and Twitter being much less popular. [4]This generation is willing to use such services, but has some concerns when it comes to sharing private information. To shop online, Xs are most likely to use laptops ( (55% of respondents); interestingly, compared to baby boomers, Xs are more likely to use a smartphone (8% of Xs surveyed, compared to only 4% of baby boomers) [3]. It is easier to persuade the representatives of this generation to use apps and digital wallets than it is in the case of baby boomers. They are also more inclined to use the social media [5]. Their tendency to trust new technologies increasingly more is also confirmed by a report from KPMG International. Compared to the previous generation, Generation X is much more likely to use their smartphones to check product information, even when shopping in a brick and mortar store. [3] This gives a lot of potential to mobile app developers who can bring this generation’s entire shopping process to the mobile world. Apps dedicated to this group must be intuitive, reassure users about safety, and allow users to go to other users’ review sites. 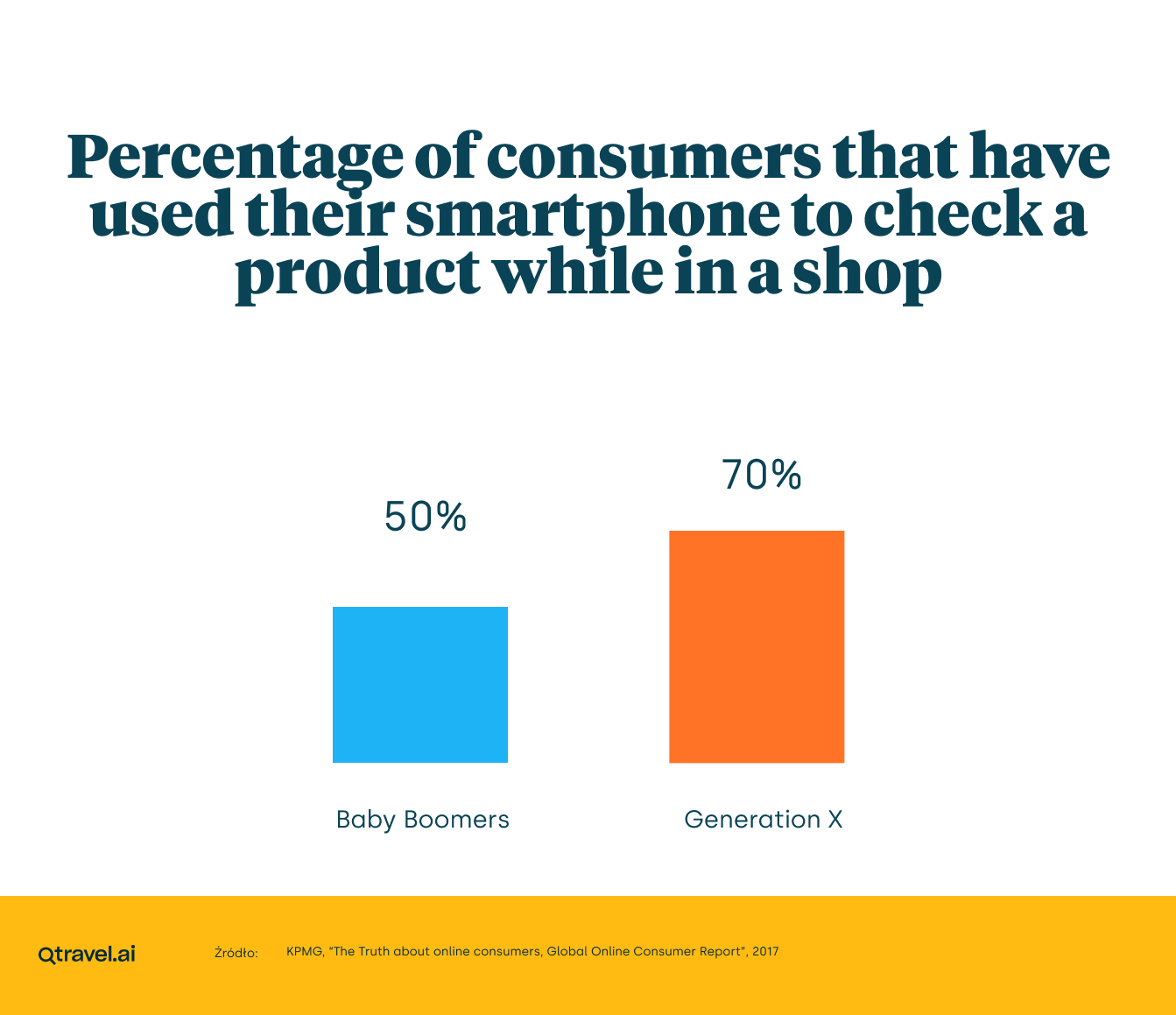 What kind of holidays do Xs enjoy?

Xs travel more than boomers. A statistical X has a high position in the company, which involves a lot of responsibilities, so they go away for shorter periods of time – these are usually around one-week long trips. However, they will try to do it more often because it also allows them to devote time to their family – according to Expedii American Multi- Generational Travel Trends- an average of four times a year. They go on holiday mainly to relax (51% of the American Generation X indicate this reason). They are also often trips to visit loved ones. This generation goes sightseeing the most.. Xs generally go away with their families, so they choose summer and winter holidays.[6]

When looking for a trip, this generation generally knows exactly where they want to go.. They select good, well-established hotels after meticulously checking the facility and its reviews. They mainly use Tripadvisor for this, whereas Facebook is the most popular reference among social media.[6] Xs are not very susceptible to advertising – they are much more likely to be persuaded by the recommendations of experts and the opinions of other tourists. 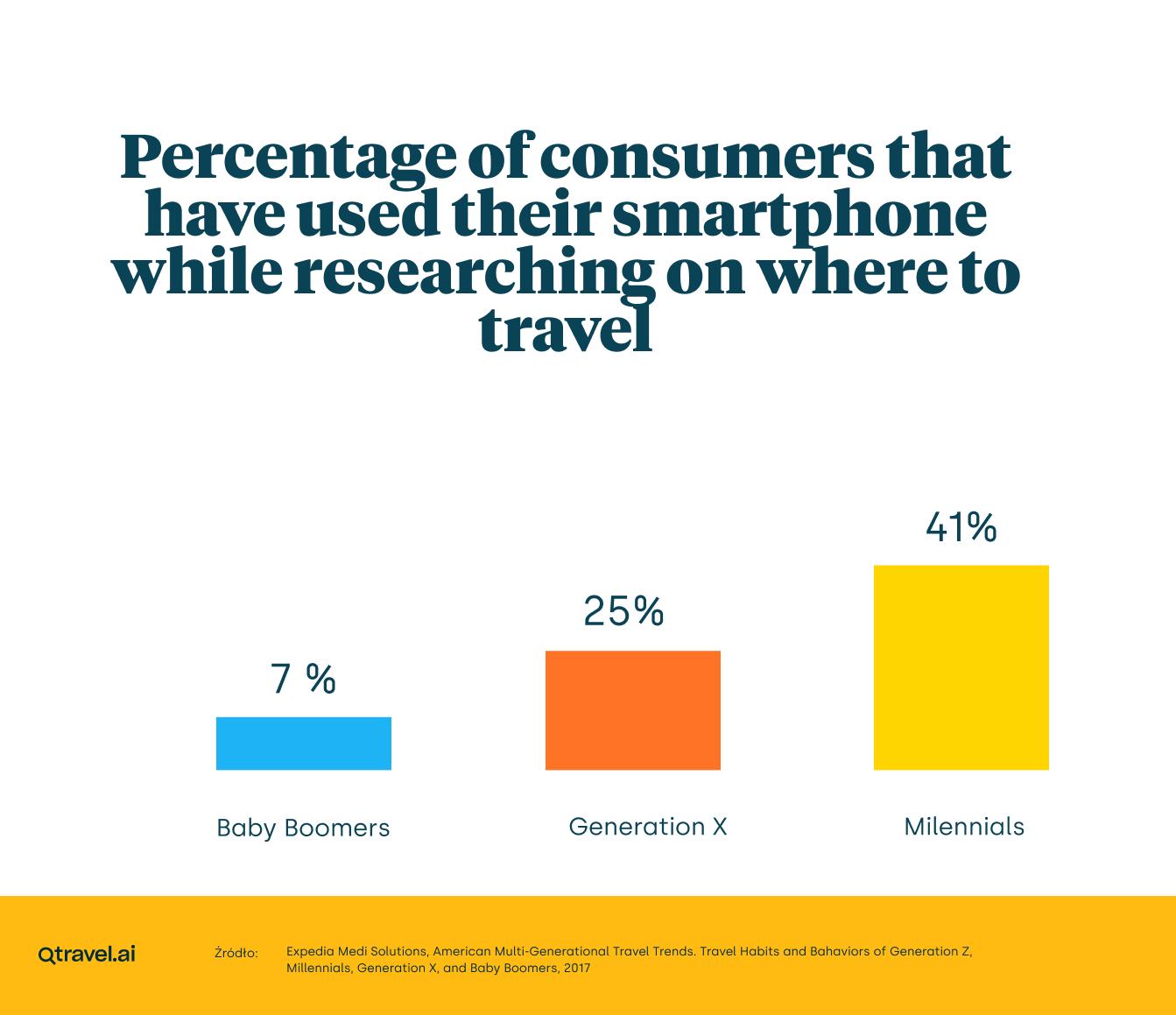 This generation spends money wisely, but when choosing a holiday they are not necessarily guided by the price – what matters most is comfort, staying in a hotel with a better standard, so that the entire family can find attractions and relax. During their trip, Xs spend time more actively than baby boomers, and they will also spend more money on entrance fees and organizing their time at holiday destinations. Interestingly, these expenses are not planned in advance – they are often spontaneous decisions, made after arriving at the holiday site.[6]
This generation declares a strong interest (70% of respondents) in exploring new places, frequently off the beaten track. A great added value is the opportunity to experience local culture, festivals, or exhibitions.

Generation X values quality. By offering good products and services we gain their trust and loyalty for years. Their openness to new technologies allows them to interact well in the digital world as well. It is a great chance to appreciate and explore the unknown quantity they appear to be.

specialist for sales and customer service at Qtravel.pl

Travel agent by profession, space enthusiast, enchanted by the city of Gdańsk.