Travel Search Trends 2020. Part 3 – do we like long holiday stays in Poland?

This time, let us take a look at how the number of tourist trips taken per year correlates with the time spent on a single trip in Poland. The percentage data are presented in Figure 1 and detailed numerical data are presented in Table 1. It should be noted (Table 1) that there is a group of respondents who say they go on annual tourist trips (sometimes even several times a year) and indicate that they do not travel in Poland. This is important information from the perspective of organisers and investors who develop the tourist base in Poland, as it indicates that over 5% of active tourists (including those who declare three, four, or even five trips per year) go only abroad. One should perhaps find a way to attract this group, at least partially, so that their tourist expenditure can be directed to the Polish market.

In the above-mentioned most numerous group of respondents who go on tourist trips twice a year, the dominant group is constituted by people who spend one week on a single trip (slightly more than 10% of respondents). They are followed by the group of 8% of respondents who, while travelling twice in a year, spend 3 days on a single stay in Poland. A rather small number of respondents (about 1%) choose trips in Poland, the duration of which exceeds 2 weeks (however, such answers appeared in the case of people taking 2 trips and 4 trips a year).

How often do you travel in a year?

As far as all the groups declaring more than 2 tourist trips a year are concerned, most respondents pointed to short stays in Poland (2 or 3 nights), which indicates increased activity during the so-called long weekends. In the group of holiday makers who travelled seven or more times a year, the number of indications of 2- and 3-day trips in Poland exceeded 21% altogether. This shows how important it is to expand weekend offers for the development of domestic tourism: this applies to both short city breaks, as well as trips related to sports or various interests (photo safaris, pottery workshops, yoga weekends, etc.) and trips aimed at relaxation and contact with nature. The development of such offers is particularly important from the perspective of regions that are not associated with typical holidays and traditional one- or two-week holidays. Shorter weekend trips can be directed to those regions of Poland which have not yet found their place on the tourist map, are just beginning the process of tourism investment and developing their offer, and are often only just defining their own factors of attractiveness. This stage is so difficult that attracting long stays (holidays), especially in the face of the unsettled Polish weather, may pose too many problems. However, the tourist group in question is comprised of travellers who take short weekend trips, and usually experimenters who are willing to look for new places, not too crowded, which would offer a unique way of spending leisure time. This type of tourism also constitutes a market buffer that mitigates the effects of seasonality of tourism, as it is not associated with school holidays or the typical holiday season – on the contrary: it reflects the desire to escape from everyday life, which we feel particularly strongly when the holidays are way ahead. 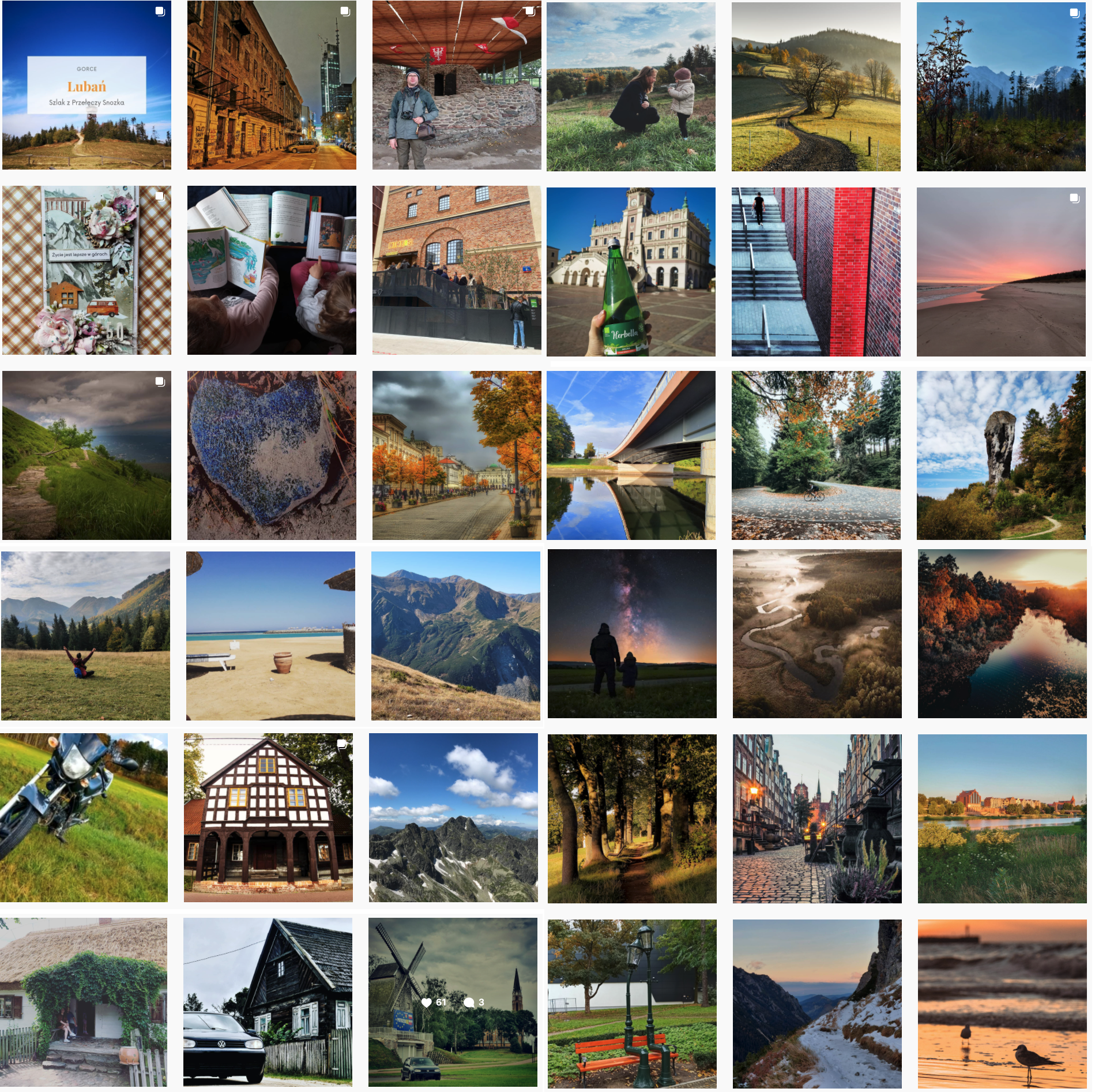 The popularity of such trips is proved by the growing number of hashtags: #wypady, #bliskiewypady, #krótkiewypady (trips, trips to near locations, short trips), and thousands of their variants in configuration with the names of regions and individual cities (practically every voivodeship and every major city already has its own ‘trip’ hashtag). For Warsaw alone, we were able to identify 112 profiles on Instagram dedicated either to weekend trips in general or to specialised forms of short trips (‘trips with children’, ‘ladies’ trips’, ‘beer trips’, ‘bicycle trips’, ‘photo trips’ and many others).

Interestingly, even in the group of people who travel only once a year, the highest percentage of indications refers to 2-3 day trips (followed by weekly trips), which indicates that even people who cannot afford numerous or long trips are ready to set aside time and money for a single weekend trip.

While in the case of people who travel twice a year, one-week stays were definitely the most popular, in all other analysed groups for which the criterion of division was the number of leisure trips taken in a year, the third most frequent answer was one-week stays. The answer of two weeks and more was chosen much less frequently. In the following sections, we will analyse the length of holiday stays abroad, which are becoming a choice for serious holiday plans more often. Regardless of the fact that the main factor for many people is probably the weather, it can also be assumed that Polish tourist base managers and tour operators have so far failed to pay due attention to preparing an attractive domestic offer for Poles (allowing for unfavourable weather conditions).

To conclude this part of the analysis, let us take a look at the answers of Polish respondents with regard to the question about the length of their holiday in Poland in relation to their income (Figure 2). In this case the analysis is slightly more difficult, because most respondents omitted the question about their income, but it can be observed that in all income groups (as well as in the group where respondents did not want to provide their income range), the highest number of indications concerned 2- or 3-night trips (in both cases 4-6% of indications). This means that regardless of the income level, an interest in short domestic trips (most likely over the weekend) is important. Interest in weekly trips is also quite evenly distributed (regardless of income level) (in the case of income in the bracket of 4,000 and 6,000 PLN the number of indications exceeded 8%).

We should bear in mind that the basis for this analysis is constituted by the results of the study described in Travel Search Trends 2020. Part 1 – characteristics of the respondents conducted on a group of respondents by Qtravel. It was a pilot study, the results of which cannot be generalised to the entire population (it included mainly people that used the services of online travel agencies).

The next part of the analysis will look at the length of leisure trips of Poles who travel abroad in the light of the results of the Qtravel study.

We encourage you to read the rest of the articles in this series:

Associate professor at the Warsaw School of Economics